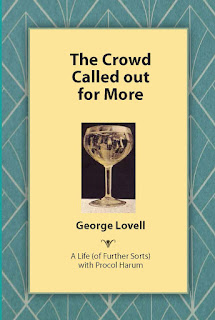 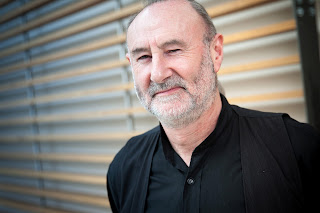 
George Lovell was 16 when he first heard "A Whiter Shade of Pale" by Procol Harum and fell in love with the English rock band. The hit single, considered a popular music classic, was one of a select few singles that have sold more than 10 million copies.

Full disclosure: I did not buy one. I have disliked "A Whiter Shade of Pale" since my high school boyfriend betrayed me, humiliatingly and publicly, to that slow-dance song, ruining Procol Harum for me forever.

George, the young Glaswegian, however, was smitten. It was three years before he found his way to a Procol Harum concert, but in the 37 years since, from 1970 to 2007, he saw the band on stage 27 times.

Those first 30 years of Procol Harum were the subject of his memoir, The Waiter Brought a Tray, published in 2007 by Kingston’s Artful Codger Press. In the 10 years since, he has brought his concert tally up to 40, which prompted a second memoir, The Crowd Called Out for More, to be released this month from Woodpecker Lane.

George, a professor at Queen’s University who divides his time between Kingston and Seville, Spain, charts this second round of concerts (2007-2017) in a coda to the book. The main text is a reprise of each concert and his travels and travails in getting there, first written as posts on the website Beyond the Pale (www.procolharum.com), affectionately referred to by Palers such as George as BtP.

The Crowd Called Out for More is replete with Procolharumisms such as Palers, Procoholics and Salty Dogs, a language of insiders. Each concert recollection is titled Lofty Peak #__, an allusion to the lyrics of the song “A Salty Dog.”

George calls it passion, but, really, we’re into the realm of obsession here. In his Preface, he thanks a Catalan friend who has collected 1,137 recordings of "A Whiter Shade of Pale." (The very idea makes me quiver with angst.) George honours the band on his licence plate: WGL 1PH. Translation: William George Lovell considers the No. 1 rock band of all time to be Procol Harum.

The Preface opens with George’s admission that this is a sequel, quoting Cervantes in Don Quixote: “They are never any good. No repeat performances, please.” It takes some courage to open a book with that kind of challenge.

The Preface is followed by a 10-page photo section that starts with a stunning set of passport pictures: a young, clean-cut Scot with George’s inimitable dimpled smile, and below it, three years later, a scruffy, long-haired rocker on his way to his first Procol Harum concert. Then come photographs of George with various band members, as well as souvenir posters and tickets. His first concert cost 10 pounds; his last, in September, cost 53.50 Euros.

What is it about the music of Procol Harum that got its hooks so deeply into this Kingston academic?

“It was a combination of music and lyrics,” George says in an email exchange this week. “There’s still nothing else like it out there.”

The name of the band is a corruption of the Latin procul harum, which means “beyond these things” or “far from these things” — an apt description of what drew George to these musicians. “Procol Harum always sounded very different. Even rock musicians (like Zal Yanovsky, for instance) say that. Their songs engage all the things that matter most in life: love, death, money, war, deceit, deception, disillusion, courage, the will to survive even against the odds. The lyrics of Keith Reid are like the music itself — singular, unique, distinct. Rock music had never sounded like that, before or since.”

In the book, George quotes guitarist Gary Brooker’s onstage pronouncements: “A lot of Procol stuff is darkness.” And later, at another concert: “Happiness is not one of the great Procol things.”

Perhaps it is the Scot in him, but this trademark darkness appeals to George. “Especially the fourth album, Home, which is all about death.” As he writes in the first memoir, “Death affirms life, matter how we reach Home. That magnificent fourth album, which I would listen to hour after hour, is the one in which I find most solace. No abyss of darkness, but liberating light is its message for me.”

The single “A Whiter Shade of Pale” was released two days before George’s 16th birthday in 1967, but the debut album it was part of — the eponymous Procol Harum — was not released until that fall. George bought it, of course, and it was then that he discovered “Conquistador,” a song that was to change his life.

As Louise Penny notes in her own memoir of the influence that song had on her writing, “Conquistador” opens with dramatic fanfare, and tells the story of a Spanish soldier who thought he was doing the right thing, fighting for king and country in the New World. But then there is the twist: “Though you came with sword held high, You did not conquer, only die.”

That irony sowed the seeds of George’s career as a specialist in Latin American cultural geography, specifically in the nature of the colonial experience and patterns of indigenous survival in Guatemala.

On his concert trips, George combined pleasure with professional business, meeting with fellow Latin America researchers and visiting archives, libraries and museums in Pennsylvania, New York, Berlin and Leipzig to view rare manuscripts and search for materials to supplement a new edition of his first book, Conquest and Survival in Colonial Guatemala. As a scholar, George is as obsessed with the impact of the Spanish Conquistadores who rampaged Guatemala in the 16th century as he is with Procol Harum.

George comes off in this memoir as a wily character. In spite of tight security around the band, he manages to fraternize with the musicians both before and after their concerts. They recognize this uber-fan by now and get him sweet seats. The manager allows him to set up his Procol Harum merch beside theirs and so, at every concert, he sells copies of The Waiter Brought a Tray, donating profits to various charities.

When George is invited to after-concert revelry with the band, he struggles to dim his starry eyes. “I do my utmost to keep my love of Procol Harum grounded and in some kind of perspective, and try hard not to let it become an obtuse fetish, the object of unwelcome derision in the minds of the vast majority of humanity for whom the name [of the band] means nothing. Above all else, I aspire to behave around band members as I would in the company of any other person … able to offer something besides unmitigated worship.”

Yet the memoir is undoubtedly worshipful. After one of the concerts, he muses: “I marvelled yet again at how music I first heard as an adolescent sustains me still in middle age — and how, especially, the prospect of hearing that music played live keeps me looking forward.”

In our email exchange, I ask him to elaborate.

“The music for me has a timeless quality. Even though it may be emblematic of an age, say the Sixties when the band started out, it does not get stuck in a temporal groove. It is dynamic, like the band itself. The music endures, as inspiration and as ever-thoughtful company.” As he writes, he is listening to a recording of the Edmonton symphony playing with Procol Harum, who, among many things, is considered a pioneer of “symphonic rock.”

In 2017, Procol Harum celebrated 50 years as a band. For George, half a century of musical bliss. “I live always in the hope that still there’ll be more,” he writes.

Am I convinced after George’s slim memoir that I should give Procol Harum another try? Well, yes. I listen to a few Procol songs, watch snippets of several concerts. I ponder "A Whiter Shade of Pale" and decide I’m over my harsh rejection. The symphonic arrangement is stunning. There’s no risk of me becoming a Paler, but I have to agree, George, it’s a pretty fine song.